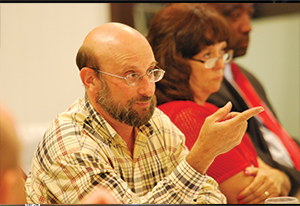 That’s what you get when you team up with Roger Kerson, creative director at RK Communications. A veteran media strategist, Roger leads concept, scriptwriting and production for cable, TV and online advertising for our clients. He has worked on high-profile organizing, bargaining, and public policy campaigns for the AFL-CIO, the United Auto Workers, the Natural Resources Defense Council, the National Wildlife Federation and other labor, environmental and non-profit organizations.

Roger has written and placed op-eds on behalf of his clients in every leading newspaper in the United States,including The New York Times, USA Today, The Wall Street Journal, The Washington Post, Newsweek, The Christian Science Monitor, The San Diego Union-Tribune, and many others.

Roger’s essays, articles and reviews have appeared in the Ann Arbor Chronicle, the Chicago Reader, the Chicago Sun Times, In These Times, Slate, Salon, the Washington Monthly, and other publications. His one-act play, Backstage Passes, was produced in April and May 2011, at Detroit’s Matrix Theatre.

Roger lives in Ann Arbor, Michigan and has served on the boards of directors of the Ann Arbor Area Transportation Authority, the Ecology Center and the Washtenaw Housing Alliance. Outside of work, he likes to cycle, follow local theatre, and scream at the television during NBA games.