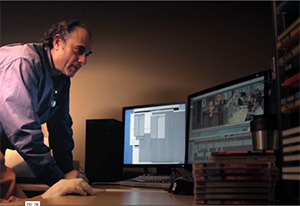 Scott is an award-winning videographer who can shoot, edit, direct and produce compelling video projects from concept to completion. For more than a decade, Scott worked as a senior producer at Michigan Media, the University of Michigan’s in-house production facility.

His recent credits include camera, sound and editing on “Never a Bystander,’ a documentary about holocaust survivor Irene Butter.

Scott has also created education, marketing and promotion pieces for a wide range of clients, including Microsoft, Kraft Foods and the University of Michigan Hospitals.

Working with RK Communications, Scott has delivered eye-catching productions for the AFL-CIO Organizing Institute, the Center for Media and Democracy, the Ironworkers union, the National Council for Occupational Safety and Health, and the Clinton Global Initiative.

Scott is a proud graduate of the University of Michigan and when not producing top-notch video is a performing musician and songwriter, an able home chef, and loves to ski in powder.